Who's the two year old?

Our Christmas Eve was very busy and hectic. Joe had a chiropractor appointment at 7:30am, we were on the road to Fort Fairfield by 9am and then driving home from Presque Isle by 7pm.


Manny had a 10 minute nap in the car, so needless to say by the time we had started for home, he was quite cranky.

He fell asleep before we stopped at the Houlton gas station and then woke up and started crying. It was that cry that could not be consoled, just a miserable unhappy cry from being over-stimulated, over-fed sugar and over-tired.

As we got back on the interstate Joe and I saw some red tower lights on top of a mountain by the side of the road and we tried to convince Manny that it was Santa's sleigh.

This is how the conversation went:

"Manny, look, it's Santa's sleigh. Do you see Rudolph's nose?"

Manny quieted down and looked, you could almost hear his thought process and he said, "That not Rudolph's nose, that just a light".

Yes Virginia, there is a Santa Clause.
Posted by The Ramos Family at 2:44 PM No comments:

On our way home from Christmas Eve, I was driving home on the interstate, trying to stay awake for the 3 hour trip home. All of a sudden I looked in the left lane and about 4 feet from our car was a huge deer with huge antlers.

(*note: it might not have been huge, but when it is that close to your car, it looks enormous)

When my stomach finally dropped back out of my throat, I said, "Ya, Manny did you see Santa's reindeer". He was so excited.
Posted by The Ramos Family at 2:37 PM No comments:

Manny visiting Santa at the mall 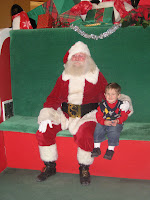 The week before Christmas, we took Manny to the mall to visit Santa. He was SO excited. He wanted to stay all day with Santa and tried to get back in line at least twice. 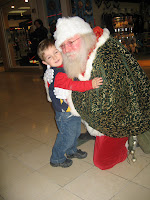 Then we let Manny play in KB Toy Store and he looked out the window of the store and suddenly he was gone. I followed him and he had seen Santa go by and was so excited to see him again.
Posted by The Ramos Family at 1:18 PM No comments: 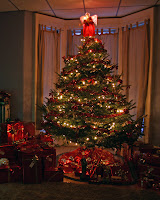 Here's our decorated Christmas tree. It is only missing 5-6 glass bulbs after Manny was done with it...well, I broke 1 or 2 myself :)
Posted by The Ramos Family at 1:14 PM No comments:


Here are some of the stockings that Manny and I decorated. He told me the names to write on each one and then we added the stockings to the green garland. 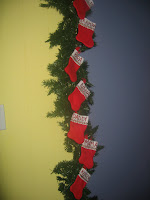 Ok, so ignore the mess in the kitchen. A nine-month pregnant woman can only do so much at once. 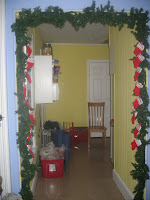 Manny decided to add his friends, Kristian, Roman and McKayla to the stockings 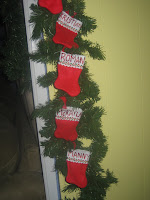 Taking the decorating into his own hands

We have had our Christmas Tree for about a week now, but we haven't had time to decorate it together as a family. We have the lights on and the angel, but no decorations.

Apparently, Manny did not think it was appropriate to have an empty tree sitting in the living room.

Look carefully, can you see it? 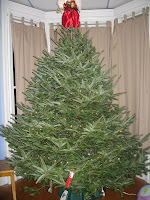 He added this to the tree. He decorated the stocking all by himself. 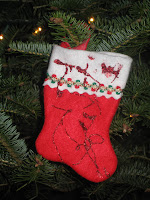 We have had our Christmas Tree for about a week now, but we haven't had time to decorate it together as a family.

Apparently, Manny did not think it was appropriate to have an empty tree sitting in the living room.
Posted by The Ramos Family at 1:50 PM No comments: 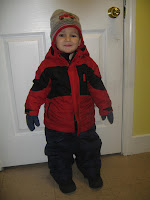 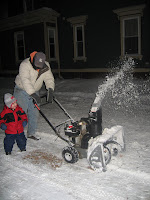 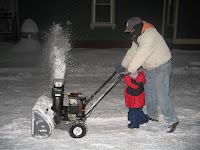 Manny loves to go outside with Joe to help him snow blow the driveway....very exciting, I know. Manny even got to help Joe this time.

I think Joe is just trying to train Manny how to do the driveway so that Joe can sit inside and watch TV.
Posted by The Ramos Family at 1:40 PM No comments:

Manny and I decided that we needed some easy Christmas craft projects, so off we went to AC Moore.

Here is the result of our first project: 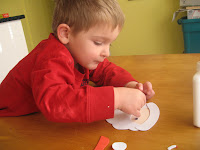 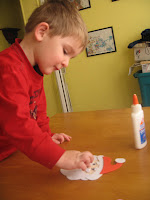 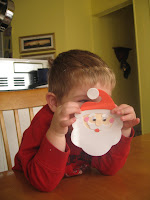 These projects are great. Everything is included in the package and all you need is glue. I love it!

A+ for Effort, F for following directions

Our mornings go something like this. Joe wakes up at about 6:00am and Manny wakes up at about 6:30am. I like to stay in bed until the last possible second. That usually means me laying in bed talking to Manny or listening to him play with his toys in the living room. I just can't get out of bed until I have to.

This morning I could hear Joe talking to Manny in the kitchen, something about M&M's (most likely Manny wanted some and Joe saying "No". Well, then Joe gets into the shower and Manny comes in and hangs out with me for a while.

All of a sudden, Manny says, "Be right back, Mama". Ok, I just lay there and close my eyes.
Manny comes back into the bedroom with an oreo. I guess I'm not too concerned, figuring Joe had left them on the counter last night and Manny grabbed one. I am not one to obsess over an early-morning oreo, what is the point?

Joe comes out of the shower and Manny says, "Daddy, Manny got cookie all by self". Joe went through the usual, "what did I say...blah blah blah". Joe asked Manny how he got the cookie and Manny said, "Manny get chair in office and climb on counter".

Manny looked at Joe with one of those reassuring looks and just nodded his head, as if to say, "I got it all by myself Daddy".

Joe told Manny that he was giving Manny an A+ for effort and ingenuity, but an F for following directions.
Posted by The Ramos Family at 3:51 PM 1 comment:

Manny and I were driving to the post office today and as usual Manny was talking to himself, me, really who knows.

I was trying to listen to what he was saying without interrupting his train of thought.

This is what I heard,

"Emeril and Rachel, and Paula at Manny's house cooking for Christmas"

"Manny like Rachael eat EVVVVO (Rachael is always using EVOO...extra virgin olive oil and Manny likes to add a couple of extra V's in there)".

My outburst of laughter immediately interrupted his train of thought and he looked up at me and said "Manny watch cooking one night wake up".

Is it just me or is it too funny that a two year old watched the Food Network and then has conversations with his favorite chefs?
Posted by The Ramos Family at 12:50 PM No comments:

Last weekend, my cousin Sarah came to spend the weekend with Manny and I. I say with Manny and I because Joe has been working some CRAZY hours lately and wasn't around very much.

I really appreciated Sarah helping me out, especially since I had both baby showers last weekend. Manny also loved having her around and having her undivided attention.


Joe was getting ready to go to work Sunday morning and Manny was talking up a storm to Joe. All of a sudden, Manny grabbed Joe's hand and said, "Daddy follow me, show you something". Joe followed Manny into the new office where Sarah was sleeping. Manny says, "Daddy, see my friend Sarah?". Sarah, of course was sleeping and oblivious to it all. 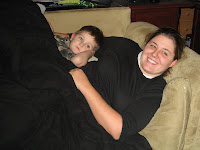 Posted by The Ramos Family at 3:31 PM No comments:

Manny's cousin Ben celebrates Hanukkah and sent Manny a present so that Manny could celebrate too.

This present was opened on Tuesday evening at sunset. Manny doesn't understand anything about Hanukkah, but was very happy to honor Ben and open a present.

A VERY excited Manny opened a HUGE truck that has even more cars inside of it. I cannot tell you how happy this present made Manny. It kept Manny entertained for almost an hour. I cannot thank Ben enough for this wonderful present!

Here's a picture of the truck: 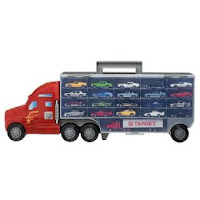 Posted by The Ramos Family at 3:12 PM No comments: